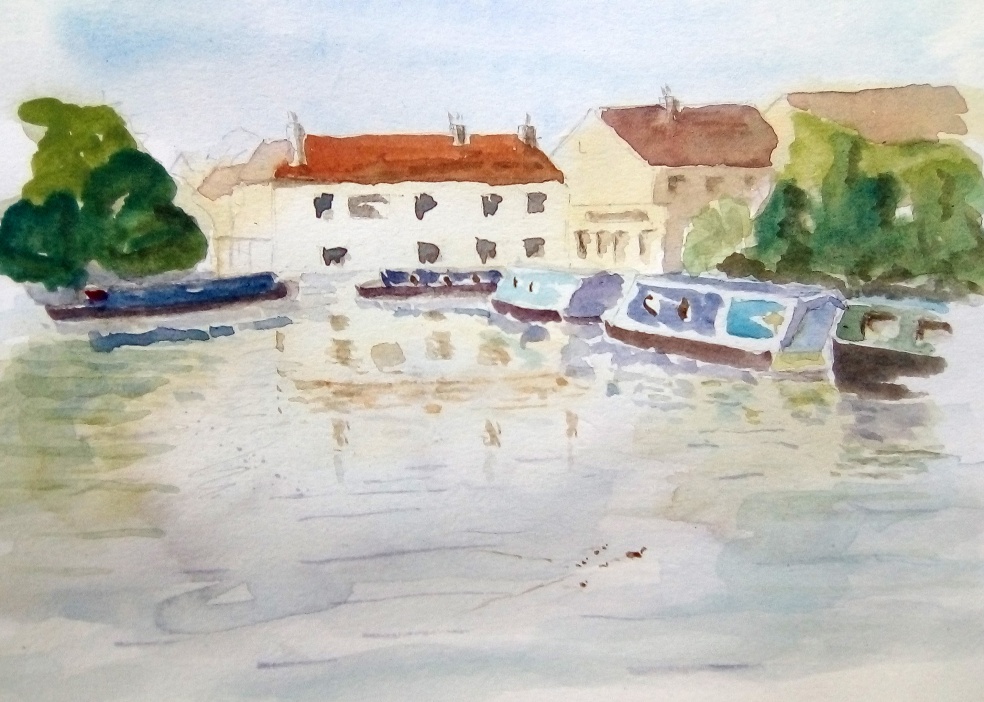 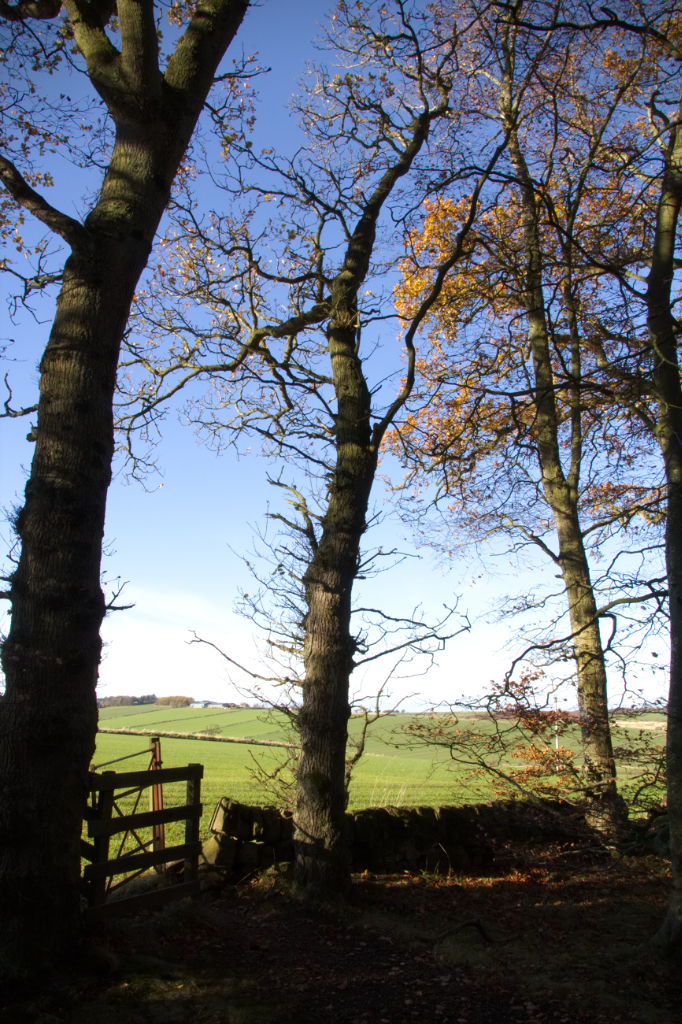 Taken in a forest near Strathkinness in northern Fife, Scotland. The image looks north towards the Sidlaw Hills and the city of Dundee.

The tree remembered being planted in the churchyard those many summers ago. For he saw the young daughter of the squire slipping in a copy of that new book on ‘Pride and Prejudice’ to wile away the long sermon. This blissful rural scene was oblivious to the battles being fought on land and sea to fence in the tyrant Napoleon.
The tree brought to mind the parishioners chattering excitedly having been told of a war far away over whether humans could own humans; trees never own each other more than they can own God’s sunlight.

He then lived many summers and slept for many winters before Johnny, the blacksmiths boy, proud in his khaki uniform marched off to France.  A few months later, his family came weeping to the yard even though Johnny had no grave there.

It seems hardly any summers at all after the Great War, that his branches were swept back by a gaudily painted plane sprouting smoke and crosses flew overhead with another firing in pursuit. Now he saw the night sky filled with new stars, all talking to each other as they silently rotated above.
More recently, he was overjoyed when a young family came to stay in the disused church which had been converted to a house.  They played in his shadow and touched his bark in games. And so, he felt the pain even more as the chainsaw cut into his flesh to make way for another room for washing, games and fitness machines. But through it all, he knew sorrow for humans who neither live for summer or sleep in winter but destroy or are destroyed in ever season.

Yesterday was a vexing day! By all accounts it was a vexing day. It started with my car not just failing its annual road test, it also requires a very expensive repair. This bad news was followed by a series of meetings each with its vexing moments. and all this was punctuated by those silent calls probably spewing out from call centres with dubious purpose.

Yet through out the various annoyances,  I saw something else. It was flashes of people in need. In fact, folk more vexed than I was and with much better reason.

The day ended with me watching ‘My house in Umbria’ in between phone calls. It is a gentle comedy which nevertheless deals with many difficult life issues. And in it we see the various characters dealing with their own and others’ brokenness. In the end, it is their mutual acceptance of what sometimes is vexing beyond solution that they find acceptance – they find healing – they find contentment at least for the day.

Not so long ago Black & Decker were preparing for a large promotional campaign. And to get the angle just right for their advertising, they sent out market researchers to find what ‘Joe Soap’ actually wanted. They returned with the discouraging news that people didn’t want drills they wanted holes. In other words, they weren’t interested in power tools only what they can do for them.

Now that was not a surprising discovery really. Few of us get on a bus to have a ride in a Van Hool special – we get on to go somewhere. And here is an important point for the church. Because it is often said that those in church don’t want to evangelise others they just what full and vibrant services. On the other hand, those outside Christianity don’t want uninvited missionaries selling them religion on their door-steps. Where then is the answer?….

This photo reminds us of the Railway Children, cabin trunks and porters with barrows. In fact, it’s toning helps us to look backwards. Yet to see things only in black & white misses a great deal. Take the current stand off between Israel and the Palestinians which is peaking with the Gazza Blockade. Now here is a situation that is all too easy to see in the monotone of our own preconceptions, limited information and even prejudices. And certainly there is no end to the violent conflicts of justice, safety, and religions surrounding the State of Israel. However, there is also a potentially rich panorama of cultures, talents and abilities that could give a much better view for all the people of the Middle East. Since if we do look at the world in full spectrum, it is more complex but it offers us more opportunities.

After all my photo was taken only a few weeks ago and it is better when we don’t look back but use what we have for the future. 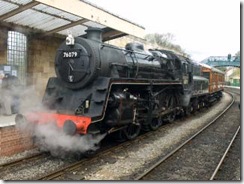 This afternoon, I did something terribly old fashioned. I just sat in the garden reading a book with a sun hat on. Old fashioned because everyone else seems to be doing something. In fact, it seems positively sinful to sit at home and enjoy the sun’s warmth. Actually, I was reading the witty an enjoyable ‘The Perfect Summer’ by Juliet Nicolson. Its a social history of the summer of 1911; the last beautiful season before the Great War. No wonder then it is subtitled – dancing into the Shadow. However, despite the growing storm clouds, there was something appealing about those years. In particular, the less pressured life when personal news came through the letter box and world tidings via the newspaper. No social websites, emails, mobile phones and satellite TV for them.

Of course there is much from that age that we would not tolerate for a minute today. Yet their pace of life with its weekly routine must beat our 24/7 obsession. Their seasons must have the pleasure of reacquaintance ship that our unbroken desire for the fruits of the globe dulls. Their joy at a perfect summer must have been greater than ours faced as it is with a constant stream of days that all seem the same in their rapidity of passing. So maybe we should,from time to time, bring some of the peace of nearly one hundred years ago back to our living of these frenetic times. Hopefully then we too will rediscover a perfect summer by visiting times gone just by being still. 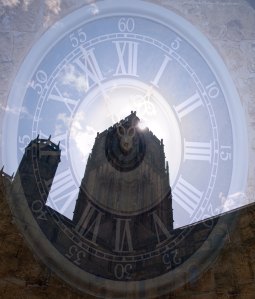 Personal meaninglessness – the feeling  life has nothing worthwhile to offer – it is… as a separation from the moral resources necessary to live a full and satisfying existences (Anthony Giddens; 1991)

If the modern world is anything, it is about increasing control. From the depths of our own genetics to the simple changing of our TV channels, we like to have control. Control then make us feel powerful and hard-wired into our DNA. Yet it does not make us any happier? For we too easily worry about our controlling choices; are putting enough away for a pension, is our travel plans changing the climate or is vote condoning the right political policies. And so with control and choice goes anxiety. The fear of what we are becoming as a result of being ‘self-made’.

This is why as in previous ages, there remains a need for some external source of what is right – an ultimate moral source – a font of wisdom as to how to make our life choices. And that  is what religious people attribute to the will of God and his purpose for us. For them, life contains purposeful decisions which in turn bestows on it meaning.